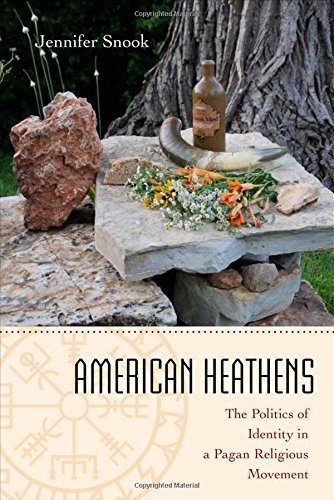 American Heathens is the first in-depth ethnographic study about the largely misunderstood practice of American Heathenry (Germanic Paganism). Jennifer Snook—who has been Pagan since her early teens and a Heathen since eighteen—traces the development and trajectory of Heathenry as a new religious movement in America, one in which all identities are political and all politics matter.

Snook explores the complexities of pagan reconstruction and racial, ethnic and gender identity in today’s divisive political climate. She considers the impact of social media on Heathen collectivities, and offers a glimpse of the world of Heathen meanings, rituals, and philosophy.

In American Heathens, Snook presents the stories and perspectives of modern practitioners in engaging detail. She treats Heathens as members of a religious movement, rather than simply a subculture reenacting myths and stories of enchantment. Her book shrewdly addresses how people construct ethnicity in a reconstructionist (historically-minded) faith system with no central authority.